The Monash Campus Cluster (MCC) is a heterogeneous high-performance  (HPC) and high-throughput computing (HTC) facility for conducting large-scale computationally-intensive simulations and analyses. With over 2,500 CPU cores across 230 servers of different CPU and memory configuration, the MCC is specifically designed to serve diverse computational workloads. In 2013, the MCC provided over 13 million CPU-core hours to over 300 Monash researchers. 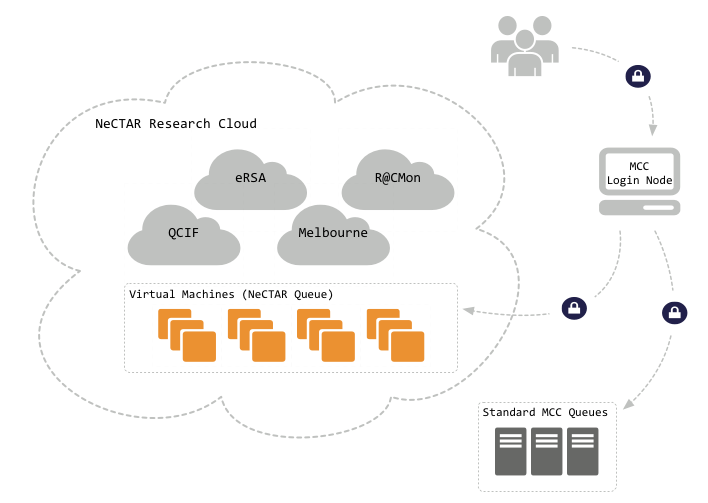 We achieve this by integrating the NeCTAR virtual machines as compute bricks into the MCC batch queuing system, presently the Open Grid Scheduler. This provides users with:

Researchers not only get to burst their computational jobs into the research cloud seamlessly, they can leverage the unique properties of each of the cloud nodes (e.g., hardware and/or software capabilities).

Since December 2013, over 40,000 CPU hours worth of computational jobs have been executed into the NeCTAR queue of MCC. The resources used by MCC on R@CMon will be expanded with deployment of R@CMon Phase 2 to accommodate specialised computational workloads (e.g., high memory jobs). Monash researchers who have their own NeCTAR Allocations and want that allocation to be presented through MCC, can opt for their allocation be managed by the “MCC on R@CMon” project. This can be arranged by contacting the Monash eResearch Centre.