Recently R@CMon signed an agreement for Inktank Ceph Enterprise (aka ICE). Inktank is an open-source development and professional services company that spun out of DreamHost two years ago. And boy have they have been pretty busy since then – not only building an international open-source community around Ceph, but also solidifying the product through several major releases in conjunction with exploring enterprise support business models. It’s both the innovation rate and the professional maturity that drew us to Ceph. The next release of ICE (due this month) includes support for Erasure Coding (think distributed RAID) and cache-tiering (think SSD performance for near spinning-disk cost)!

The R@CMon – Ceph journey began in September last year where we introduced block storage based on Ceph to the NeCTAR Research Cloud. Others have been paying attention too and now several other NeCTAR Nodes (NCI, TPAC and QCIF so far) are using Ceph to meet their block storage needs. Monash now has just shy of 400TB raw capacity colocated with the monash-01 compute zone/cell and another 500TB coming with monash-02 deployment. With other developments in the pipeline we expect to have well over 1PB of storage managed by Ceph by the end of the year!

One of the things that came with the release of ICE was a closed-source management tool, Calamari, which provides the sort of graphical status, monitoring and configuration dashboard you might expect from “enterprise” software (how that term makes us cringe!). Calamari is starting to look pretty slick and is certainly one piece of the puzzle transitioning a storage solution adopted and built in the eResearch Healthy Hot-House environment to a robust service delivery practice – getting woken up at 2am in the morning if a storage node dies is not in my contract! 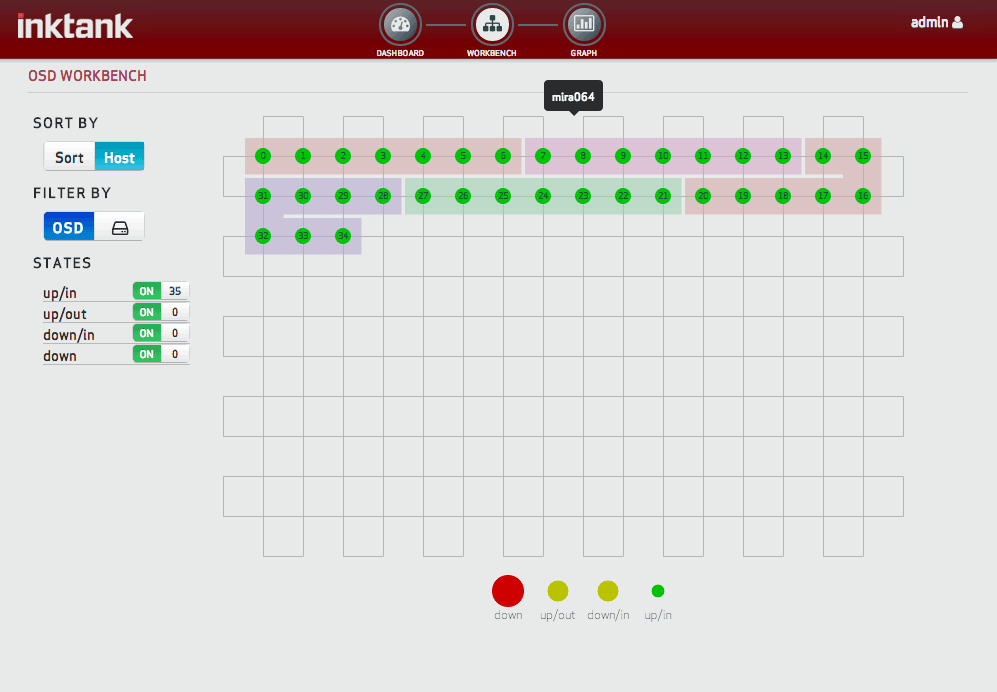 Not long after we’d signed up for ICE, Inktank was acquired by Red Hat for a cool $175mil. This announcement was surprising in that it was unexpected – Red Hat already has an iron in the software-defined storage fire in Red Hat Storage Server (GlusterFS wearing a fedora). But once digested this appears to be a very astute move by Red Hat as Ceph has been the sweetheart of storage for OpenStack deployers, thanks largely to its ability to converge object/block/filesystem, something that took the NAS-oriented Gluster a while to catch up on. It seems Red Hat now have a firm grip on software-defined storage!

Red Hat’s acquisition of Inktank is good news for us as it will ultimately mean a supported version of Ceph on an enterprise Linux distribution we have a broad skills base in, with local technical support personnel to back it all up, and in a much shorter timeframe than Inktank could have delivered on its own. And true to their upstream-first philosophy, Red Hat has already open-sourced Calamari.

It’s an exciting and disruptive period in the storage market!