In part one of this series, we showed how to set up an NVIDIA BlueField-2 DPU with the aim of simply using it as a NIC  (https://rcblog.erc.monash.edu.au/blog/2022/02/how-do-i-use-a-dpu-as-nic/). Today we’re going to delve a bit deeper and offload network layer encryption to the DPUs so that VMs running on the Host can use more of their allocated resources while still communicating securely.

Servers and processors are becoming faster and more powerful, but at the same time the requirement for greater network security is increasing and end-to-end network encryption is mandatory in some of the more sensitive data research workloads. As the data throughput on the CPU is pushed to the limits, processors start to steal compute cycles for the network to be encrypted away from computing tasks for research work.

Our aim is to try to mitigate part of this issue by offloading the work of encryption and decryption of traffic from the processors on the hypervisor(host) to the DPU and enable our researchers to work more efficiently and securely.

Below is a diagram of the setup we used while testing:

Figure: Diagram of the setup we are describing. Two hosts running one VM each, each host has a DPU installed in a PCI slot, the DPUs are connected directly to each other (back to back).

As we explained in our previous blog post, the DPU’s have programmable hardware for data processing, in this example the DPU has been programmed to process data coming in on port p0 which is then passed to the host which in turn is presented to the VM as the Virtual Function (vf0). The virtual function interface appears at the VM as eth1.

Setting up the DPU

To set up the OVS bridges and strongSwan (5.9.0bf) IPSec tunnel we used NVIDIA’s example from this website
https://docs.nvidia.com/doca/sdk/east-west-overlay-encryption/index.html

The change we needed to make was to add the interface pf0vf0 to the OVS Bridge vxlan-br0 on both DPUs to allow the VM’s to communicate with each other.

Example of OVS settings from one of the DPUs

With the above OVS configuration, the logical flow of packets will be as below.

Here is a diagram of the “Path” defined by the above configuration:

Diagram of the logical setup: 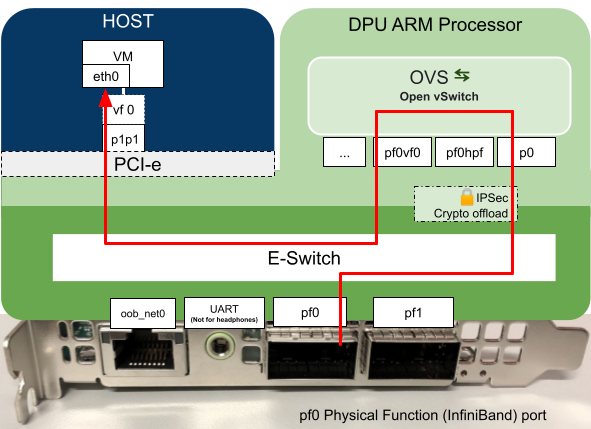 Figure: Logical flow of packets through the DPU to the VM.

The diagram was referenced on NVIDIA’s original from (https://docs.nvidia.com/doca/sdk/l4-ovs-firewall/index.html)

By default two files are created in /etc/swanctl/conf.d when flashing the DPUs with DOCA SDK.

We also want to make some changes to the .conf files.

Note: Make sure there is a new line at the end of these files or the config may not be applied correctly.

Commands to switch offloading on and off

We can now transmit data between the VMs which will automatically be encrypted by the DPUs as the information goes over the wire. We use iperf3 to generate network traffic between the VM’s while switching on and off hardware offloading capability on the DPU.

We start with hw-offloading disabled to observe the following results

With offloading turned off via OVS on the DPU, we can see a ksoftirqd process with high cpu utilisation in the DPU.

And the rate of data transfer increased more than 10 times than what we were seeing with hw-offload disabled.

We can also view the offloaded flows on the DPU when hw-offload is enabled:

At this point we’ve set up two VMs and built an ipsec tunnel between them on the DPUs which automatically encrypts data sent over the wire.

As we provide IaaS (Infrastructure-as-a-Service) using OpenStack, the next step is to automate the setup of this configuration in the infrastructure using our CICD configuration management at DPUs so that the network traffic from the research workload VMs are encrypted underneath. We also consider having dedicated IPSec tunnels for the VMs from different projects running on the host so that underlay encrypted network fabric is separated for each project.