The Monash Country Lines Archive (MCLA) is a collaborative project between the Monash Indigenous Centre (MIC), Faculty of Arts and the Faculty of Information Technology with a team of researchers, digital animators and students. The MCLA aims to support the indigenous Australian communities in the preservation of stories that combine their history, knowledge, poetry, songs, performance and language. MCLA began working with the Yanyuwa people of Borroloola, NT, creating a number of animations between 2007 and 2010. It was these animations that caught the attention of Dr Alan Finkel, the then Chancellor of Monash University. In 2011, the Alan and Elizabeth Finkel Foundation supported the project for a further five years.

Render from “Why We All Die” 2015 ©MCLA & Taungurung Dolodanin-dat Animation Group.

Since its foundation in 2011, the MCLA has produced nine short-form animated films ranging from four minutes to twenty-four minutes in length while working with the communities through every step of the animation process; script, storyboards, character and landscape concepts and construction, animation, rendering, sound and post-production. Initially, producing these animations was challenging due to their heavy computational requirements. The MCLA team didn’t have access to any dedicated render-farm resources as would be normal for a commercial animation studio, so all rendering works were done on individual desktops and laptops. This resource limitation forced the MCLA team to compromise advanced rendering techniques in order to quickly render a large number of scenes while still maintaining a certain level of production quality. 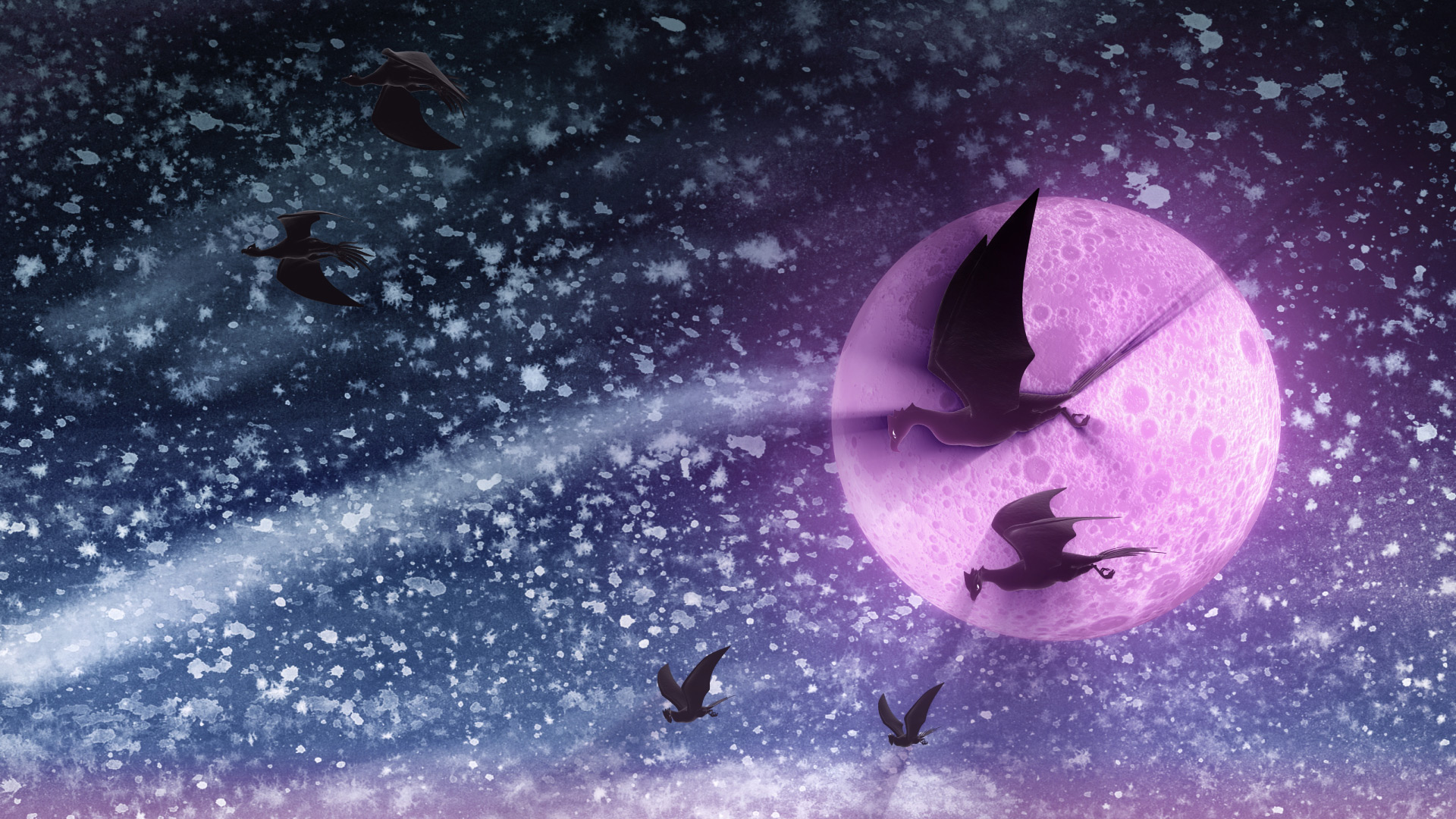 In 2013, the MCLA team gained access to the NeCTAR Research Cloud, giving them a much needed rendering capacity boost. The R@CMon team assisted the MCLA in deploying and dynamically scaling their workflow into a distributed rendering workflow in the research cloud. Modelling, animation and rendering software have been licensed and configured on this virtual render farm. The farm has been configured so that MCLA can easily access it remotely to submit jobs and inspect their renders. The MCLA then started applying advanced rendering techniques in their workflow, techniques that weren’t possible on their previous setup. After several years of usage, demands for MCLA to produce more and more high quality visualisations also increased. This required the render farm to scale more, much more, and it did. 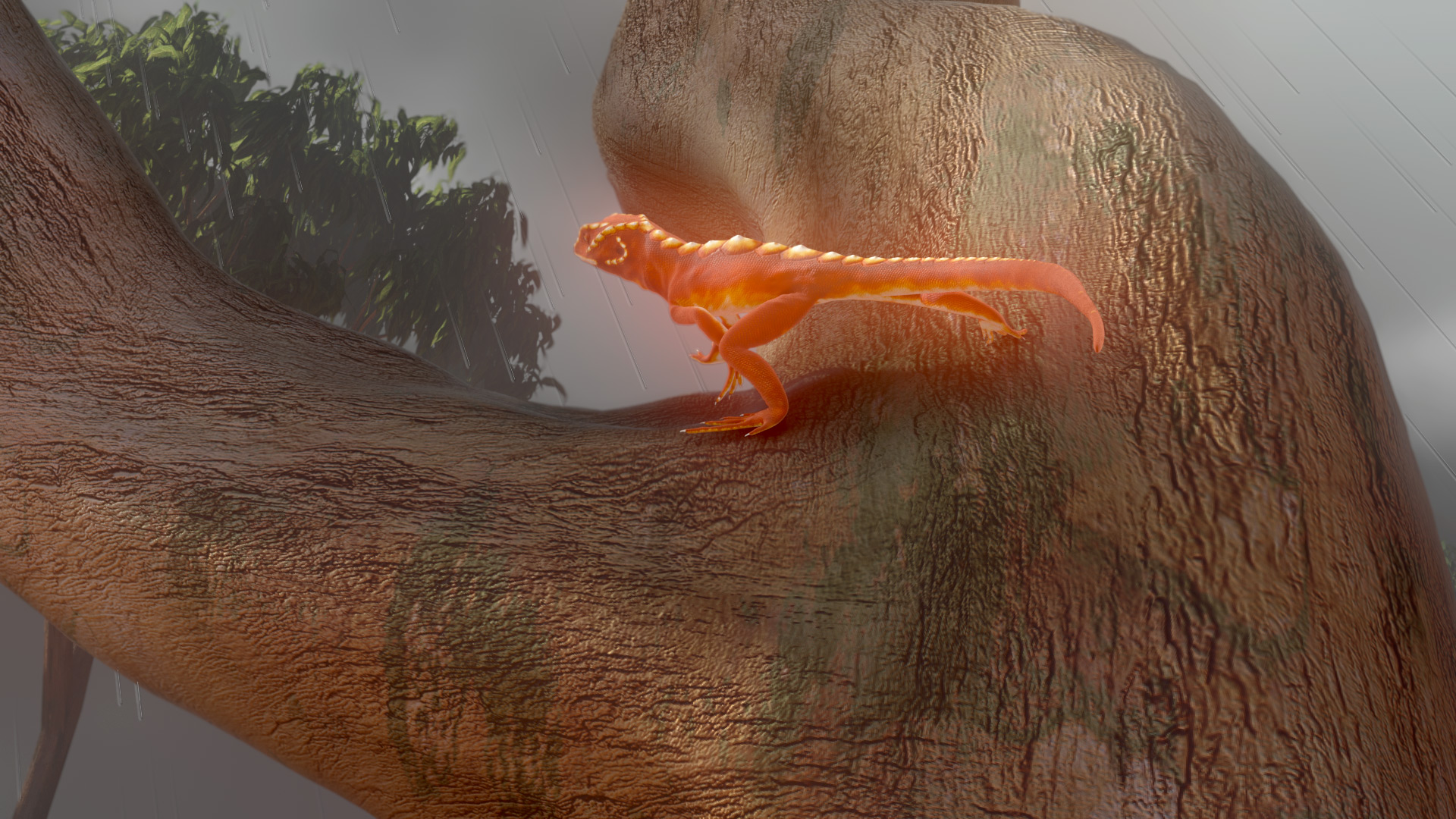 Access to the research cloud-backed render farm removed a huge limitation for the MCLA, inspiring them to produce more animations for the indigenous Australian communities without compromising on quality. The R@CMon team will continue to support the MCLA going forward and will be there when the time comes that the farm needs more power. The MCLA is composed of Dr John Bradley, Dr Shannon Faulkhead, Brent D McKee, Dr Tom Chandler and Chandara Ung. 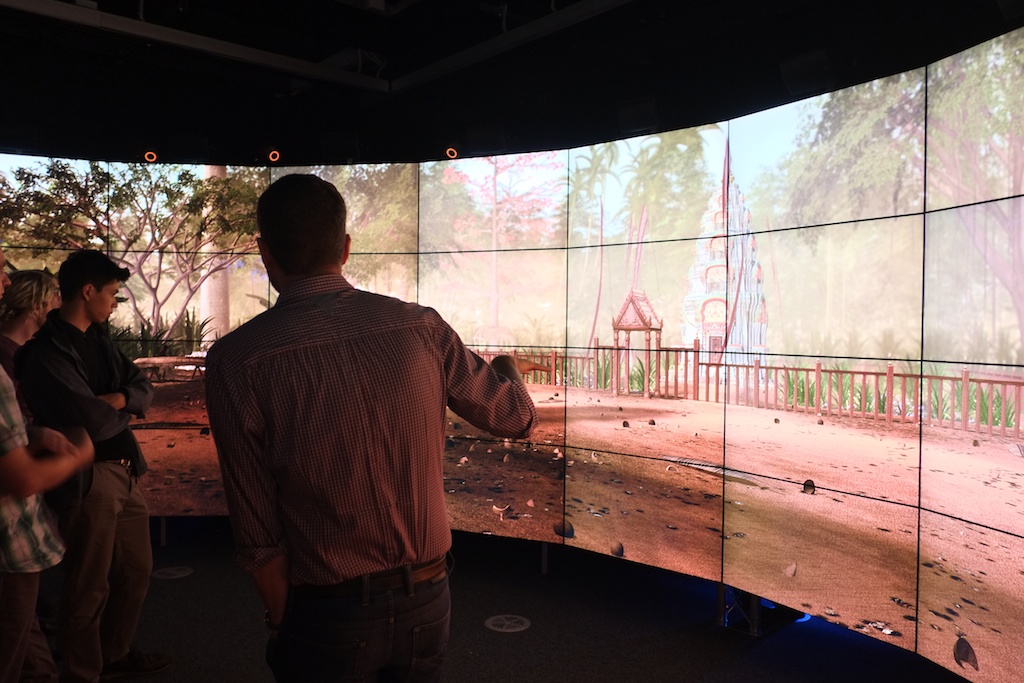 The Visualising Angkor Project in the CAVE2 facility.

The Maya/mental ray virtual render farm has been instrumental in producing 27K x 3K panoramic stills and animations for this project. This workflow has been proven very challenging for Tom and his team before they started using the NeCTAR Research Cloud for their rendering jobs.

The resulting high-resolution stills and animations are loaded into the CAVE2™ environment using advanced visualisation software frameworks. This provides a compelling visual and aural environment with a 330° display view – the lens of the 21st century microscope. 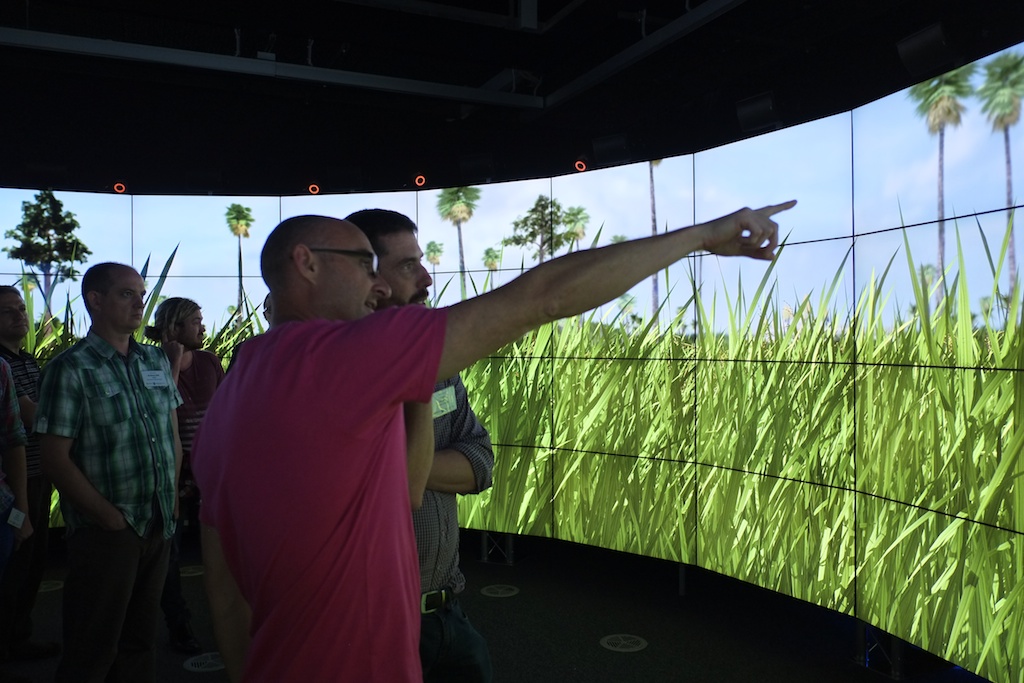 In 2014 the R@CMon and CAVE2™ teams will work together to build a CAVE2™ development environment on the NeCTAR Research Cloud. This will give end-users the opportunity to work with and test the tools and middleware available in the CAVE2™ environment on-demand, without needing access to the facility itself. This development image will take advantage of R@CMon’s new GPGPU accelerated VM flavors – more on that soon!

Tom Chandler, Lecturer, Faculty of Information Technology at Monash University and his team have been using both Maya and mental ray to create highly realistic images and animations for various projects. Their previous render farm was built with traditional desktop machines. As the demand for more resolution, more detail, more frames and more projects continues to increase, they realised that desktop rendering couldn’t provide the capacity and agility to meet their resource requirements. Fortunately Tom heard of a similar render farm the R@CMon team helped in porting into the NeCTAR Research Cloud and then approached us.

The R@CMon team assisted Tom’s team in setting up a Windows Server 2012 environment in the Monash node of the NeCTAR Research Cloud where both Maya and mental ray are installed, licensed and configured. Access to the environment is done using Remote Desktop Connection. 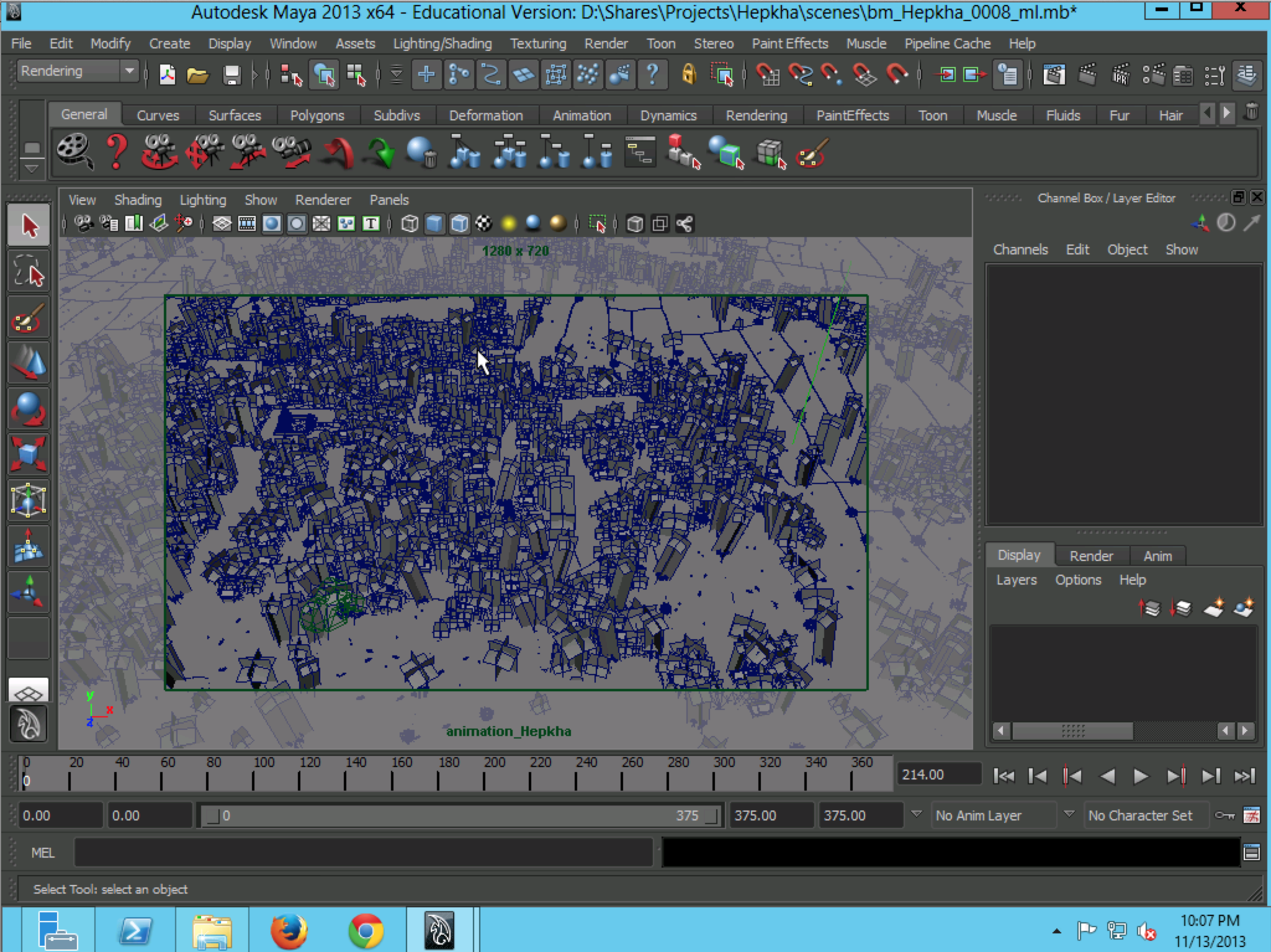 Tom’s team started migrating their 3D rendering projects into the Maya/mental ray render farm now running on the NeCTAR Research Cloud. One of these projects is The Visualising Angkor Project – “Visualising Angkor Project” Monash University Faculty of IT, 2013. It is a collaborative project between Monash University and University of Sydney which explores the 3D generation and animation of the Angkor landscapes during the medieval period. The project presents some challenges on how virtual Angkor is interpreted based on archaeological and historical data.

Jon McCormack, an Associate Professor from Faculty of Information Technology at Monash University, creates high-resolution renderings of various subjects. His artworks have been showcased in leading galleries, museums and symposia.

Before the advent of the Monash node of the NeCTAR Research Cloud, Jon has been limited to running his render jobs to a couple of machines he can get his hands on in the faculty. After the first phase of the Monash node went online, the R@CMon team helped Jon in porting his rendering workflow in the NeCTAR Research Cloud environment. Jon uses Cinema4D for creating his high-resolution renders. Cinema4D runs on Windows and OS X so we’ve prepared a suitable Windows Server 2012 image for this purpose.

We assessed the performance of a NeCTAR guest running a rendering job. For this, we’ve used CINEBENCH from MAXON, a well known benchmarking tool to measure and compare CPU and graphics performance of various systems and platforms. The following video shows CINEBENCH running on a 16-core guest in the Monash node.

The CINEBENCH result showed that the guest performed well on the “Main Processor Performance (CPU)” component. Once GPUs become available in the second phase of the Monash node, we’ll be looking at running the second component of CINEBENCH which measures “Graphics Card Performance (GPU)”.

The following are some low-res renders from the “Image from Fifty Sisters, commission for the Ars Electronica Museum, Linz, Austria 2012/2013. Copyright Jon McCormack” project that Jon produced using his render farm in the NeCTAR Research Cloud. 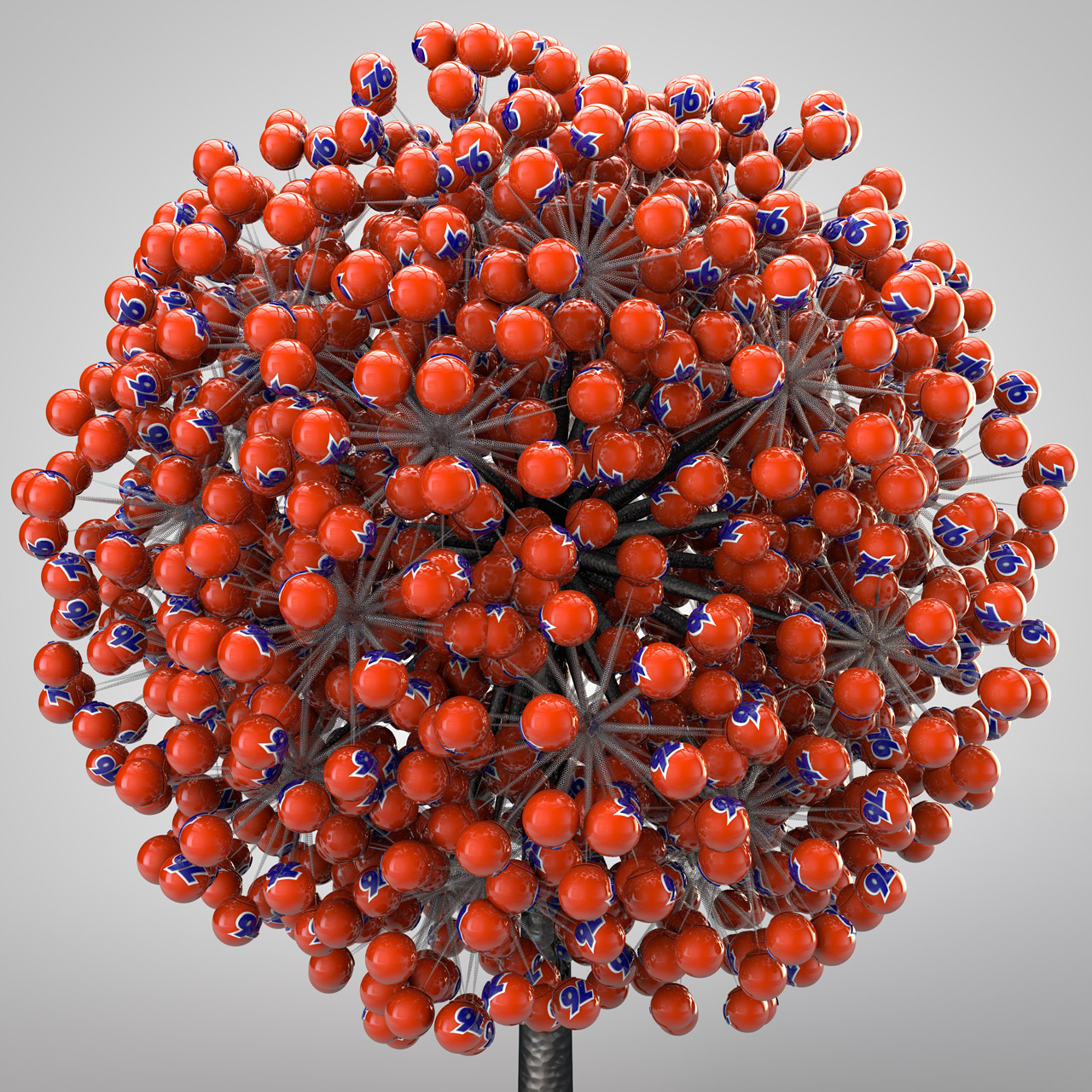 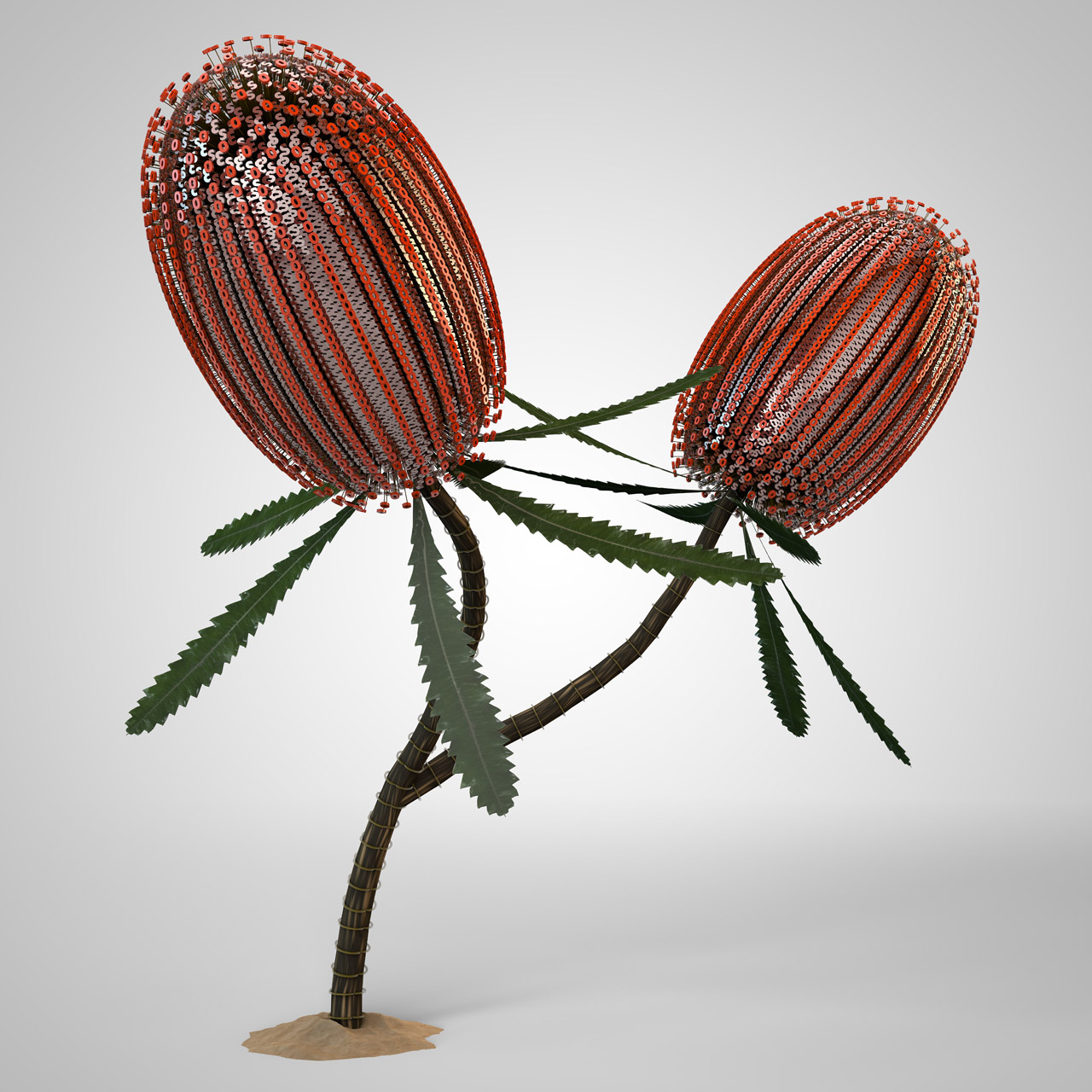 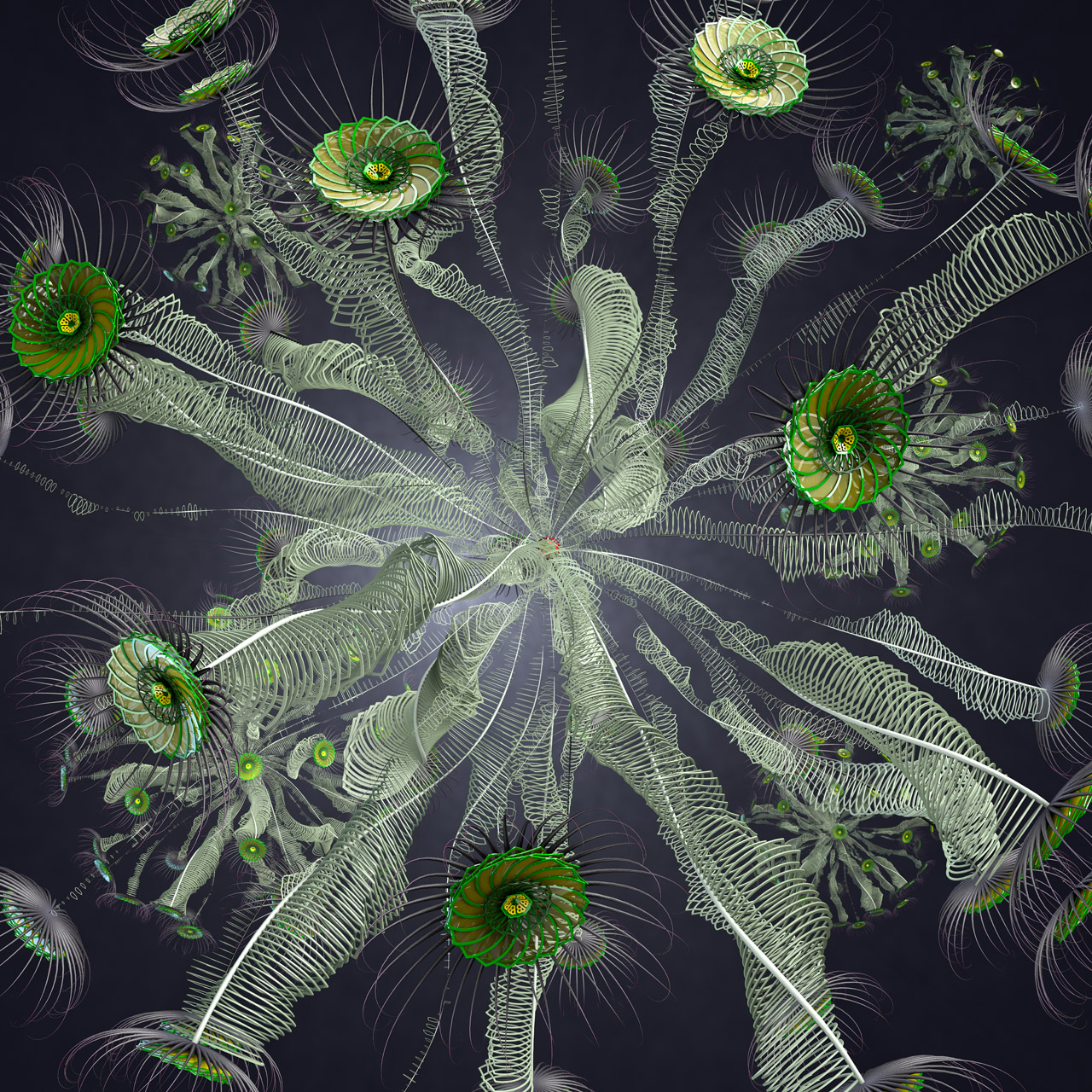